Foreign capital has always been regarded as the "smart money" of the A-share market. In 2019, foreign capital opened a burst buying model. The market estimates that the inclusion of the three major international indexes in A-shares has brought an increase of 540 billion, of which the net inflow of funds from the Shanghai-Shenzhen-Hong Kong Stock Connect to the north has reached nearly 3,500 Billion, a record high. More importantly, the move of foreign capital has become a market vane, and they are and will continue to profoundly change the ecology of A shares.

The total market value of foreign shares is 1.77 trillion

The first three quarters of data previously released by the central bank show that domestic RMB stocks, bonds, loans, and deposits held by overseas institutions and individuals have all increased month-on-month, totaling four items totaling 5.86 trillion yuan. It is worth noting that the total market value of stocks held by foreign investors was 1.77 trillion yuan, a 38% increase from last year's 1.28 trillion yuan.

Since December 2013, the People's Bank of China began to disclose the stock market value of foreign funds. According to It is estimated that as of the third quarter of this year, based on the market capitalization of foreign currency, foreign-invested stock assets amounted to 1.76 trillion yuan, of which QFII & RQFII held 0.60 trillion shares and Lufentong held 1.16 trillion shares.

The influx of foreign capital is closely related to the inclusion of the three major indexes in A shares (or expansion). According to estimates by Guosheng Securities, the three expansions of A shares by MSCI this year have brought more than 460 billion yuan of incremental funds to A shares. Including the increase in funds brought by the inclusion of A-shares in Fuji Russell and the Dow Jones Index, the capital increase in A-shares brought by the three major international indexes since this year is about 540 billion yuan. 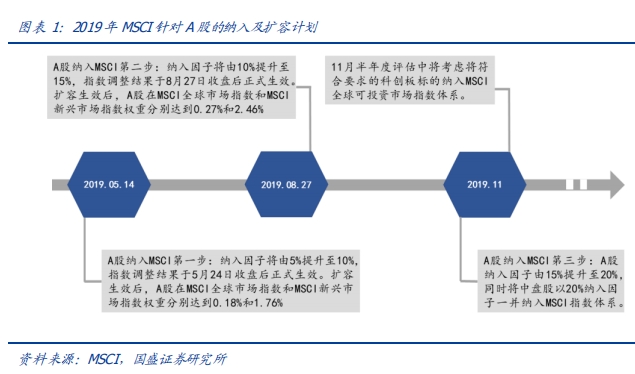 How strong is the ability of foreign capital to "sweep goods" in A shares? In 2019 , , Three stocks were almost bought by foreign investors.

According to the regulations of the Shanghai and Shenzhen Stock Exchanges, the critical points of foreign shareholding are 26% (alert point), 28% (purchase point) and 30% (mandatory reduction point).

According to the latest data from the Shenzhen Stock Exchange, as of December 25, QFII / RQFII / Shenzhen Stock Connect investors held The number of shares in the total share capital has reached 27.64%, which is only one step away from the 28% ban on buying; The proportion has also reached 26.09%.

In fact, back in March of this year, Because of the high proportion of foreign-owned shares, it was "purchased." The Hong Kong Stock Exchange issued a statement on March 5 stating that due to Overseas investors have a total shareholding ratio of more than 28%. From March 5, 2019, Shenzhen-Hong Kong Stock Connect has temporarily stopped accepting buying orders for the stock.

Dazhi Wang, general manager of Shanghai Investment Morgan Fund, said that foreign capital likes certainty and is willing to pay a premium for it. They buy in various countries / regions in industries that have global comparative advantages and have core competitiveness in the industry. Leading company. The top 100 stocks held by foreign investors in the last five years have an excess return of 384%.

How much foreign investment or inflow will be made in 2020?

Guosheng Securities said that from a rhythm perspective, after MSCI completed the "three steps" expansion during the year, there should be at least a half-year window to determine the next expansion process of A shares. From international experience, during the MSCI expansion interval, foreign investment will still continue to flow unilaterally.

Chief Strategy Analyst Zhang Xia said, "In 2020, the expansion of MSCI and other international indexes for A-shares will slow down, and the resulting passive incremental funds will be weakened accordingly. However, considering that foreign funds are currently held in A-shares, The proportion of stocks is not high, and it is still in the step of adding positions. With reference to the process of South Korea and Taiwan in incorporating MSCI, it is expected that overseas funds will generally remain in a net inflow state in 2020, and the total is expected to reach 250-300 billion yuan.

In the latest research report, it is expected that the scale of annual overseas incremental funds is expected to reach.

In the long run, foreign investment is just the beginning. Qian Delong, chief economist of Qianhai Open Source, believes that the previous global capital allocation to the A-share market was too low, accounting for only 2.5%, which is far lower than China's GDP, which accounts for 16% of global GDP. The gap is very large. To some extent, this also means that foreign capital will continue to flow into the A-share market in the next 10 years.

Which stocks do Beixiang Capital and QFII like most?

At the individual stock level, since 2019, which stocks does Northbound Capital and QFII prefer?

The data shows that as of December 27, 2019, the ranking is based on the changes in the number of shares held and the proportion of outstanding shares. , , , , , , , Waiting for 17 stocks to obtain a northbound capital increase of over 7%, of which More than 13%.

From the perspective of the industry, technology and medicine are undoubtedly the two main lines of northbound capital focus increase. Like in the medical field , , Etc .; also in the field of technology stocks , , Guangxin ring network and other stocks.

Which shares have QFII increased?   Data show that as of the third quarter of 2019, the stocks with the highest QFII holdings are also concentrated in the pharmaceutical, consumer and technology sectors, but there are also non-bank financial sectors. , And steel .

Foreign investment: optimistic that next year A shares will expand stock selection along 4 main lines

Morgan Stanley also predicted in the 2020 outlook report released at the end of the year that the large-cap stock index will rise in 2020. Take the Mingsheng China Index and the Shanghai and Shenzhen 300 Index, which represent the offshore Chinese stock market, respectively. The target prices for the two are expected to be 85 and 4180 points in 2020. % Upside.

UBS's "overweight" position on Chinese stocks has not changed. Tan Minlan, chief investment officer of UBS Asia Pacific, said that the overall performance of Chinese companies in the third quarter was better than expected. The interesting thing about the Chinese market is that although the growth rate is slowing down, it can be seen that the economic structural adjustment that all sectors are striving for is "bearing fruit". The economic restructuring of the past few years has made consumption a greater contribution to China's economic growth.

UBS said in its 2020 outlook report that it is bullish on the stocks of Chinese Internet companies and 5G smartphone supply chain companies.

However, it is worth noting that as the popular A-share track starts to crowd, foreign investors are more inclined to expand the stock selection range in the future. Lin Huatang, manager of China Equity Portfolio of U.S. asset management giant Lianbo Group, said that global investors investing in A shares through the stock interconnection mechanism is more convenient than previous QFII and RQFII channels. At present, the layout of foreign investment in A shares is mainly concentrated in Consumption, health and technology are three major sectors. This trend contains both opportunities and risks.

Lin Huatang believes that "due to excessive concentration, the inflow and outflow of foreign capital will cause large fluctuations in the relevant sectors. The opportunity is that there are currently more than 3,400 listed companies in A shares. From a liquidity perspective, there are about 1,000 stocks It can be included in the scope of foreign investment. At present, foreign investment may only be concentrated on the largest 40 stocks. If you do your homework, you can find good investment targets from more than 900 other stocks. "

A newly released research report indicates that if the proportion of foreign holdings in the total market capitalization in the last month is sorted and the list of the top 30 stocks to be increased, it can be found that foreign investors are clearly buying A along 4 main lines. Stocks, that is, real estate completion chain, underestimated cycle chain, technology stocks represented by computers and media, and callback white horse stocks.

Some QFII fund managers have stated that the valuations of many good companies are now more expensive, and we will look for other better opportunities when performing portfolio allocation. Some companies have good textures, but their performance is inhibited due to the industry environment. Once the market environment changes, the performance of such companies will be reflected, and Alpha benefits can be obtained from it.

Lu Wenjie, a Chinese investment strategist at BlackRock, the world's largest asset management company, believes that the market is generally pessimistic about the manufacturing cycle, while manufacturing inventory has bottomed, and weak investment is mainly due to the lack of confidence in the market. At present, it has been observed that the forward-looking mood of the manufacturing industry has improved. Combined with the implementation of the tax reduction policy, the cyclic industry will have a large rebound space next year.

Scan the QR code below to download the "Yimeng Trader" APP